The last time I checked, there is, or rather there used to be, a Free Press in America. But now, after reading certain publications and certain recorded statements, I am not so sure any more. In Britain, we are used by now to the BBC, along with many of the newspapers, in their website pages and news bulletins, removing any hint of the possibility of the ethnic origin or religious make-up of, say, a rapist, a thief or a terrorist, except when the perpetrator is WHITE. They are referred to as ‘of Asian extraction’, or ‘Algerian-born British man’; etc., etc.. The fact that 99.99% are called Mohamed, or some variation on that particular paeadophile’s name, makes no difference. It remains unsaid and unacknowledged that they are Muslim.

But I still had high hopes for ‘the Land of the Free’. After all, you’ve got a bloody Constitution, written down and everything, which says Freedom of Speech is the freedom to speak without censorship or limitation.

So when a Buffalo newspaper describes a multiple drive-by shooting in a Black neighbourhood, it included a series of facts.

Various prominent Black citizens took it upon themselves to charge the newspaper editor with stirring up racial tension, as the shootings were presumed to be random.

But a deeper investigation of the records of the injured and dead discovered that:-

A public meeting was held, and the News Editor was requested to attend. Many in the crowd expressed outrage that the police records of the shooting victims were reported at all. They called the report a gross departure from how The News traditionally treats crime victims and that it was disrespectful to the victims, their families and the African-American community.

Among statements made during the meeting were “”I feel that we were victimized twice,” said Cheryl Stevens, mother-in-law of Danyelle Mackin, one four victims who was killed in the shooting. Another made was “”What you did to us was you poured salt on the wounds that had not even healed. So, I’m asking — and this is for all the families — we want an apology,” added Stevens.

So the Black so-called Community not only wants and requires all knowledge of the colour of the dead not to be reported, it also wants an apology from the Editor for stating the truth, which was the colourful and lengthy criminal records of those same victims.
General population in America is   White………..80%    Black and Hispanic………………15%

Not too many British people recognise or can actually translate or place the German word ‘Kindertransport’. It sadly came into being in 1938, with the British Government’s ruling on the allowed immigration of German Jewish children onto British shores. The initial appeal for the migration of 10,000 Jewish children into the then ‘Palestine’was ignored, but heavy pressure brought by influential Opposition as well as Government supporters brought about a House debate, and a change of policy.

The rules were strict, harsh and never-to-be-deviated-from. The children, who eventually came from Germany, the old Czechoslovakia, Denmark, Estonia, Austria and other German-annexed lands, were to travel without any relative, small children were simply to be given to an older child to be looked after, were allowed only a small suitcase each, and the clothes which they wore! A bounty of £50 was charged by by the British Government, who had insisted that only private individuals and charities would take care of the children upon arrival, with no official activity, approval or cost to the taxpayer to be invoked.

They came in their hundreds, and then in their thousands; as the Continental Jewish families began to realise that Hitler and his Germany had little time for Jews, and life was rapidly becoming intolerable, especially after the horrors of Kristallnacht spread like a fast cancer across a Germany which was all too accommodating to the anti-semitic calls of a rabid Nazi Party and their armed stooges.

They arrived by air, they stumbled across the quays of Harwich, they arrived blinking at Liverpool Street Station, the last ship carrying the Kindertransport children left the Netherlands on May 14 1940. Some 99.9% of the parents and families of those Ten Thousand ‘Kindertransported’ children perished in the ovens of the Nazi Death Machine; that same Machine which of course was never known about, never revealed, and never-ever discussed by a totally innocent German population.

The figures in the statue represent a small group of five ‘Kindertransport’, blinking in the sunlight as they arrived at Liverpool Street Station.

You can also tell of the manner in which this simple tribute, sculpted by Frank Meisler, himself one of the ‘Kindertransports’ is looked upon by the inhabitants and passers-by by the litter and garbage which is so casually dumped upon the base of a tribute such as this!

X-posted from A Tangled Web

The post quote comes, modified of course, from Which Movie? Prizes and Points are available!

Couple of posts previous, I asked if the Commonwealth Games was in doubt, and for lack of a picture, I posted the demolition of the old Yankee Stadium.

But the picture of the collapsed footbridge adjacent to the actual site of the games is much, much worse. From initial reports, as well as an examination of photos available, the problem seems to have been caused by a ripple failure of the cable clamping devices which supported the actual walkway from the arched structure. If any one of the anchors to the cable supports collapse, extra weight is then distributed to the remainder of the cables, anchors etc. If they are designed, built and installed correctly, those cables should withstand the extra force, but if they have been built to a price, and not a quality, then the Games has inherited a huge problem. 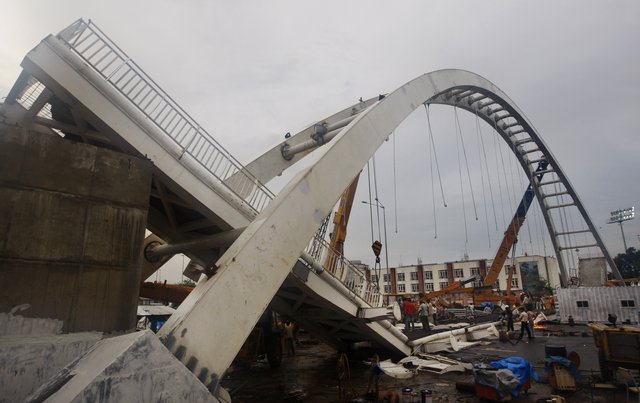 News reports coming in as I write indicate further problems, with a section of the suspended ceiling in the‘Weight Lifting’ hall falling directly on the the sport area.

Earlier reports indicated problems with the track and field events, I wonder if there will be many National Teams heading Delhi-wards, or will there be a massive, world-wide attack of bad backs, strained groins and pulled muscles?