I was going to make a few sarcastic comments about the lunacy of a Radio reporter describing the contenders for the new Turner Prize this morning as my first post on the new ATW, but then I read of the sorry State of this Nation, and decided to concentrate on this instead.

The flag up above is the Union Flag, under which our forces fought, and died, so that good might prevail over evil. We did not know, when War was declared in 1939, how evil the Nazi regime really was, but the reasons given, which was that we had a Treaty with Poland, and Hitler had invaded that Nation, was good enough for the British government, and the British people. 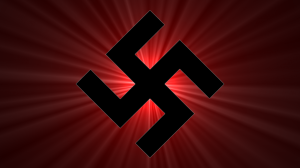 The flag depicted at the side, is of course, the symbol of the Third Reich, both instantly recognisable and universally detested. Some seventy years after the Battle of Britain was fought, the ones who personally fought those who marched, flew and sailed under that evil symbol are rapidly getting fewer each year. Time does that to we human beings. But the memory of that crooked cross lives on, and for good reasons.

We must ensure that the Liberty which many thousands died to protect is never diminished in any way whatsoever; which is why I write of the utter stupidity and gross cowardice of the Cawthorne Jubilee Museum’s chairman Peter Kilner. The Museum had planned and built an exhibition which commemorates the 70 years since the Battle of Britain, and also of  the role the village and its residents played in World War Two.

In amongst the exhibits was a large Nazi flag, stating, rather obviously, ‘this is what we fought against’.

But someone was ‘offended’, and since that is so terrible, the offending flag was covered up with a Union Jack.

Sometimes, when the nights are dark, and I remember what it was that drove those thousands to fly, fight, shoot and kill under the Union Flag, I really do despair of this Nation!