As I am deeply interested in the political and financial affairs of our Nation, I sometimes wonder if the definition of Justice is different for some people as to the rest of us. For the purposes of this small essay, ‘Some People’ means those with access to extremely large sums of money, along with regiments of lawyers dedicated to help them keep that money from the depredations of nasty people such as the Tax Collection branch of Her Majesty’s Customs & Revenue. Allow me to elaborate if I may.

Barclays Bank is split into two divisions, one is the friendly (sort of) Bank which has branches throughout Great Britain, looking after your money, paying ridiculously low rates of interest for the privilege of using their deposit facilities for that cash, loaning money at usury rates, and in general making substantial amounts of profit for the shareholders. So far, so normal. They of course, like all mega-banks, have another Division, labelled Investment Banking & Wealth Management. This is of course where the jolly boys and girls sit who deal in ‘Casino banking’, earning huge amounts of money for their clients, and also incidentally creaming off profit for the Bank and ‘bonuses’ for themselves. Now what I have just described is perfectly legitimate, perfectly legal and, in the financial world we live in, perfectly acceptable. The owners of all that money ask Barclays to invest it and look after it, and Barclays, for instance goes into ‘Forex’, which is ‘Foreign Exchange’ to the uninitiated, and literally bet mega-sums of money on tiny changes in ‘rates of exchange’ between currencies. If they get their bets correct, and to all intents they are bets, they make massive profits. Of course, for every winner, there must be a loser, and sometimes they do lose, but the boys and girls at Barclays are pretty good at the ‘Casino Banking’ business; witness the massive profits listed even in bad times and recessions!

Now far be it from me to state that Barclays IMWM division is doing anything either criminal, actionable or against the law, but scrutiny must now focus on a sub-division of Barclays IMWM named Structured Capital Markets Division, which features programmes which try and minimise tax liabilities for their clients and themselves. They, together with banks of tax lawyers ranged in levels of scum, formulated a system whereby a series of gigantic loans named Pelleas and Claudas, switching loans through the Cayman Islands, Luxembourg and the United States. The sums involved totalled £9.8 billion (that is £9,800,000,000 to we ordinary folk), and involved a complicated structure designed with one thing, and one thing only, in mind; and that was to make it so that any tax eventually paid was a fraction of the amount which should have been paid to the Tax authorities.

A whistleblower obtained copies of all the documents, describing this massive tax-evasion scheme to Vince Cable, and through him to the Guardian.
A Financial Times commentator stated:-

I was lucky enough to read through the first of the Barclays documents…
I will say it was absolutely breathtaking, extraordinary. The depth of deceit, connivance and deliberate, artificial avoidance stunned me. The intricacy and artificiality of the scheme deeply was absolutely evident, as was the fact that the knew exactly what they were doing and why: to get money from one point in London to another without paying tax, via about 10 offshore companies. Simple, deliberate outcome, clearly stated, with the exact names of who was doing this, and no other purpose.
Until now I have been a supporter of the finance industry – I work with people there regularly and respect many of them, and greatly enjoy the Financial Times and other financial papers. However this has shone a light on something for me, and made me certain that these people belong in jail, and companies like Barclays deserve to be bankrupt. They have robbed everyone of us, every single person who pays tax or who will ever pay tax in this country (and other countries!), through both the bailouts and schemes such as this.

Barclays reacted violently to prevent the Guardian from printing the detailed statements on the Web, and this part of the story ended when Freshfields, Barclays’ lawyers, toiled into the night to compel the Guardian to remove the documents from the website. Geraldine Proudler, a solicitor acting for the Guardian, was woken by a high court judge telephoning at 2am and asked to justify their publication. At 2.31am, Mr Justice Ouseley, over the phone, ordered that the documents be removed from the website, by which time 127 people had read them.

At the end of a two-day hearing, Mr Justice Blake ruled that the ban remain, even though the memos were circulating around the web. Anyone could find them within minutes on sites such as WikiLeaks, but he did not accept that all confidentiality had been destroyed.
He also believed that the Guardian was not justified under the Human Rights Act in publishing the unexpurgated documents containing legal advice and other confidential matters.

He specifically ordered the Guardian and other media not to “incite” or even “encourage” their readers to go to other websites to view the documents. Out on the internet, however, members of the public were busy discussing and copying the documents for themselves.
This absurdity was ridiculed a week later by a peer, Matthew Oakeshott, who was then Lib Dem Treasury spokesman. He used parliamentary privilege to tell the public what newspapers could not, when he outlined the case to his fellow peers in the Lords.

Now I have visited the Wikileaks site where the documents are discussed, one discussion giving rise to the above quotation from the Financial Times, and although I have not the skill or the software required to download the Barclays Bank files, I will be continuing to attempt to do so!

I am writing this for the simple reason that I believe in the old-fashioned British idea of ‘fair play’! Not the ‘Fair’ so long spouted or promoted by the likes of Blair, Brown, and all the other Labour Party thieves which states that rich people should be divested of all their earnings, which shall be ‘shared equally’ by the ‘deserving poor’, whoever they may be! My ‘Fair Play’ would be that whether rich or poor, a single person or a gigantic corporation or Company, you all must be given an equal shake, and in return, pay what is considered due to the Government of the day! Its maybe a little simplistic, but that is the way I am.

What a bunch of cheese-paring thieves, vagabonds and plain rogues are resident under the flag of a British bank which used to be above reproach!

So you are a young footballer. You are in sight of the ‘big money’, you read the headlines about the cars, the girls, the booze, the lifestyle; its all on your plate, about to be handed to you!

And then you learn that your mates have beaten up, intimidated and robbed at knifepoint a young man the same age as you are. So what do you do? Do you act as a public spirited citizen would, and tell the police what you have learned? No; you contact the victim, and proceed to harrass and intimidate him into dropping all charges against your ‘mates’. You threaten him with physical violence if he does not comply with your demands. One of your statements is recorded as “’You don’t know me any more. You don’t know what I’m capable of.’

But you yourself are arrested & charged with Intimidating a witness.
But the gods are smiling upon you. Your are handed a twelve-month ‘Refferal Order’, which is a legal way of saying “Well don’t do it again, you naughty boy”! Oh, you are also fined £1,500 in costs and compensation.

Is it because you are a ‘Supremely gifted Talent?’ Is it because you play for Manchester United, and of course have access to the finest legal talent money can buy? Is it because the Club stated “’The club does not in any way condone Ravel’s actions, but he is a very talented player with a bright future ahead of him. The right thing to do now is to support him and help him in the process of his rehabilitation.

You have a result! You can go back to kicking your balls, and scoring with the girls, and getting hammered every other night in years to come. No prison time; no shower time with some very hard cases, even in a ‘Young Offenders Institution’, no real punishment at all!

Unlike the victim and his family, who are now under such pressure because the youngster and his family actually stood up to a bully who also was a Footballer!

We are often reminded that these people are ‘Role Models’ for a generation. I wonder if my own boyhood hero Jackie Milburn would ever have contemplated ‘witness intimidation’ as an adornment to his lifestyle? Somehow; I think not! 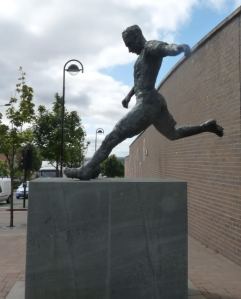 Will a man post a picture of Ravel Morrison on a blogsite some twenty-three years after his death? Somehow, I doubt it!