The British Politicians, with one voice, parrot the reply, “We’re Listening to the Scientists, and reacting accordingly”. As the numbers sweep inexorably upwards, as Italy signals ‘defeat’ by extending the lock-down to the whole of their virus-stricken Nation, as South Korea reacted so swiftly, and in doing so seemingly slowed down the infection rates, and of course corresponding fatalities: what is the British government doing? Sitting, with their fists clenched and wedged firmly up their arseholes, watching as the airports welcome ever more airplanes full of potential carriers: and not even warning those arriving of the severe possibilities of disease or death possibly carried amongst them. Truly a right bright bunch of Cnuts!

These are the same ‘Scientists’ backed by algorithmic spreadsheets and data ten years out of date who parroted about how to combat ‘Foot and Mouth disease’; whose ‘advice’ ended up costing Great Britain £9 billions in replenishment costs for the slaughtered cattle and sheep alone.

Those same ‘Scientists’ who started the BSE plague in the first place by relaxing the strict temperature requirements for the heat treatment of pig swill: along with the suicidal policies  of allowing possibly contaminated meat and offal tissue from one species to be fed, haphazardly and with no supervision whatsoever, to another, totally different animal species.

And now we seemingly depend upon their interpretation of the  ‘Scientific Facts’ to determine when and if large, frighteningly large numbers of people will die a seemingly terrible death. If we heard one of these so-called Scientists admit that they do not even know how Coronavirus is transmitted, that would be a ‘first’: but they will not even tell the  public,  a Public which they are supposed to be serving, the truth about what they ‘DON’T EVEN KNOW THEMSELVES’! 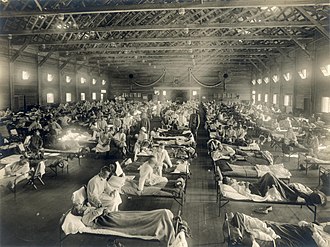 When the Spanish Flu pandemic of 1918-19-20 hit the world, it could not have had a more auspicious birthright. Large portions of the world’s population were hungry, many starving; more were worn out through the years of War, of strife, and, most importantly, there were vast encampments full of soldiers, refugees and other, mainly military-allied warehouse structures. The first recorded case of the H1N1 virus was of a soldier. In early March 1918, he reported to the sick quarters in Fort Riley, Kansas, complaining of being feverish. With the vast movement of American soldiers en-route for Europe, the unknown virus travelled with them, and within weeks, the hospitals were flooded with the sick and the dying. As it was a new strain of Influenza, no resistance had been built up within any population, and the  disease struck with frightening rapidity within any centre where exposure had happened.

Fast-Forwards almost exactly one hundred years, and we find ourselves staring down the barrel of a weapon for which there is no cure, no antidote (despite all our vast knowledge, technology or expertise), and for which  we have NO TOLERANCE WHATSOEVER!

And what is the  advice of the smug pillocks who smile, and dole out the advice as though they, and they alone, know all the answers? Wash your hands for twenty seconds! Apart from being a boon to soap, sanitiser and gel manufacturers, this will possibly serve no purpose whatsoever, because these smug bastards do not know if the CoronaVirus is passed by bodily or hand contact. What is it is airborne? Will a carrier, who is not displaying any symptoms yet, be transmitting the bacteria throughout the cabin of the aircraft he is returning in from some diseased hotspot?

Instead of doing as President Trump has just done, which is to ban all flights from Europe, instead of following the stance and advice of the Taiwanese Government, who stare daily at their giant enemy across the narrow ocean strait which separates them; the British did sweet fuck all!

When the WHO was notified on Dec. 31, 2019, of a pneumonia of unknown cause in Wuhan, China, Taiwanese officials began to board planes and assess passengers on direct flights from Wuhan for fever and pneumonia symptoms before passengers could deplane.

As early as Jan. 5, notification was expanded to include any individual who had traveled to Wuhan in the past 14 days and had a fever or symptoms of upper respiratory tract infection at the point of entry. Suspected cases were screened for 26 viruses, including SARS and MERS. Passengers displaying symptoms were quarantined at home and assessed whether medical attention at a hospital was necessary.

As a direct result of this control, Taiwan has, of this date; only 49 confirmed cases, and one death! Great Britain & Northern Ireland has 460 cases, and 8 dead; and counting!

Whose scientists do you trust?

The ‘IT’LL BE ALRIGHT ON THE NIGHT’ CROWD’ IN BRITAIN; OR THE TAIWANESE: THE PEOPLE WHO HAVE STARED DEATH DOWN THE BARREL OF CHINESE DISEASE, AND LIVED TO TELL THE TALE?